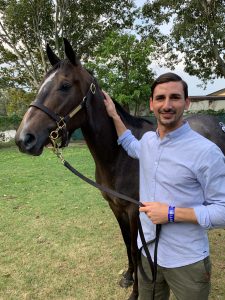 Meet Michael and you will instantly see his profound admiration of the horse and his unmeasurable passion for the Thoroughbred industry.

He is a Michael Costa Racing of trainer, being diversely skilled in thoroughbred physiology and performance. He is a fresh ambassador for thoroughbred racing, thoroughbred rehabilitation and welfare. He has an expectation for perfection and is renowned within the industry for his natural horsemanship and his ability to listen to his horses.

Michael’s training journey began as he established himself as a leading track work rider, sharing in Group 1 success with some of Australia’s finest Racehorses. As he rode for leading Sydney trainers at Royal Randwick,  he understood that he needed a distinctive edge in a highly competitive industry.

Michael commenced studies in equine science, acupuncture and massage. His ability to ride and experience the horse’s locomotion combined with his knowledge of the equine gave Michael one of the edges he had been seeking. Having the ability to read the horse, Michael created specific treatments achieving remarkable results with repeated form reversals and winning consistency.

Racing NSW became aware of Michael’s determination and offered him a position as a Metropolitan Stipendiary Steward. Michael took the opportunity to further his knowledge of the official side of the Racing Industry that very few are privy to. He was quickly appointed as the Deputy Chairman of the Northern Rivers Racing association before returning to Sydney to join the Metropolitan panel as a Senior Steward.

After four years of Stewardship, Michael’s desire to be in contact with the equine was too strong and saw him return back to his element, partnering Kevin Moses as his stable foreman. They swiftly made a strong impact in the Sydney training ranks, achieving some of the stable’s highest strike rates and a long list of elusive wins. Michael gathered momentum and with extreme support from key industry owners, new participants and interested onlookers, he acquired his own Metropolitan trainers license in August 2010.

With an extensive list of qualifications, Michael has learnt from some of the world’s best trainers and combined that experience with leading edge sport science to now claim a style of his own.

Raj Dhaliwal has been the stable foreman for Michael Costa Racing since 2016, having initially joined the stable as a stablehand when the operation was based out of Sydney. Raj has played a large part in the stable’s transition from Sydney to the Gold Coast and is our longest serving employee.

Racing Manager Michael Morrison is an ‘all-rounder’ who is responsible for client relations and race programming, acting as Michael Costa’s right-hand man in the day-to-day running of the stable. He is a graduate of the Darley Flying Start program.

WATCH THE VIDEO BELOW TO FIND OUT MORE ABOUT MICHAEL

Senior Stablehand Natalie James has in interesting background having previously worked with horses in the British Army as part of the King’s Troop Royal Horse Artillery. Her love of horses is infectious!

WATCH THE VIDEO BELOW TO FIND OUT MORE ABOUT NATALIE

Don’t just take our word for it

Michael is a young up and coming trainer with an exceptional eye for a horse and the small things which, is extremely important. Michael and the Michael Costa Racing team's communications with their owners are second to none.

Our horse has gone from a non-winner to taking out his first race within three starts with Michael Costa Racing. This guy will be the next big thing in racing and I encourage everyone to jump on board now.

The Michael Costa Racing team have helped syndicate a range of our passed in horses from the sales giving our breeders another option for selling. Every horse we have sent to Michael returns to the stud for spelling in immaculate condition. Michael has a very high attention to detail and explains each horses idiosyncrasies to the finest detail.

Get the most out of your racing experience Contact us now!