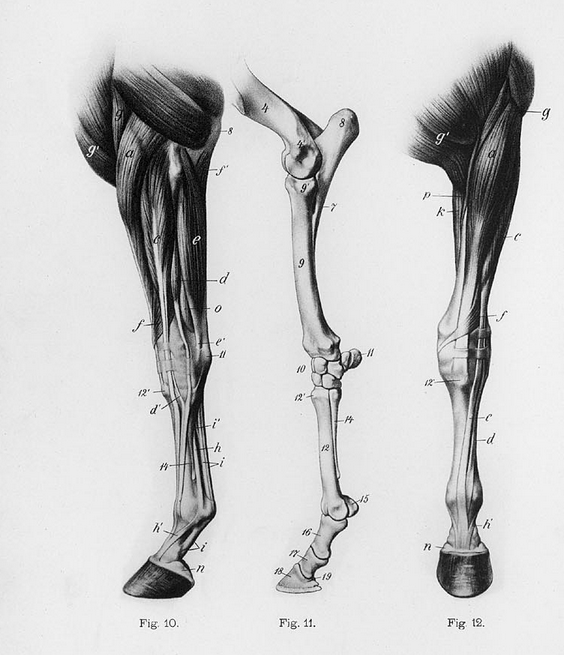 The bones of the equine front leg are similar to those of the human arm, arranged in the same order: shoulder blade, humerus, elbow, and radius and ulna in forearm. There are a few minor differences. The two arm bones (radius and ulna) are fused together in a horse and the ulna is smaller, but the upper end remains as the point of the elbow. In humans, these two arm bones are separate but paroled in the forearm. This allows the human forearm to rotate at the elbow where as the horse’s forearm cannot rotate. Thus, in the horse’s from leg, the knee, which is equivalent to the human wrist, must move forward in a straight line. This is critical to the action and stability of the horse’s leg in supporting and propelling his body.

Another difference is that the human arm is free moving and independent from the shoulder joint down, whereas the horse’s humerus, is attached to the chest wall by skin and muscles. It has a fair range of movement, although it is encased in the body of the horse. The range of motion of the horse’s upper arm is limited, as a human’s would be if someone were to tie a rope around the chest and upper arms, leaving the arms free from only the elbows down.